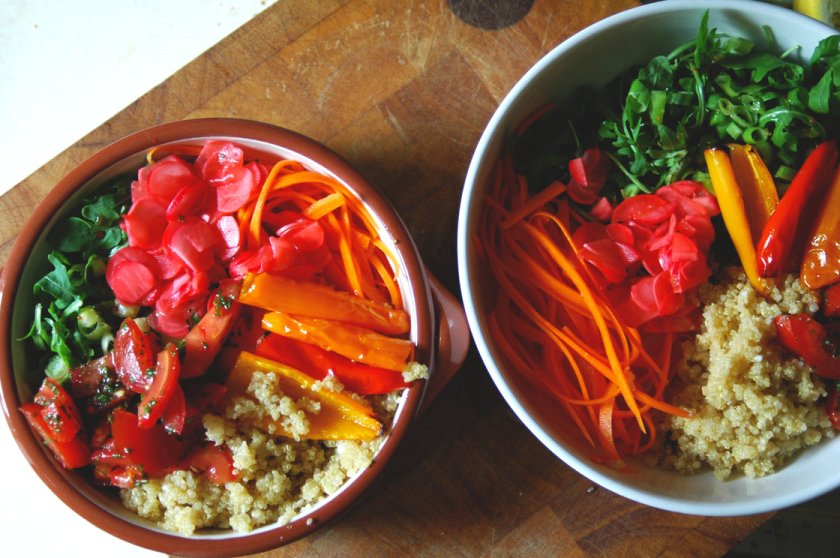 If you’re a regular, you’ll know I recently announced that I am venturing in to six weeks of veganism after watching Vegucated. It’s a challenge that I’m wholeheartedly embracing not only for my body (and the animals of course) but also my brain, nothing could kick me vigorously in to learning more about plant based foods than making them the only thing I can eat. So in all my recipes for the next six weeks I’ll be including new things I’ve learned about ingredients and their health benefits, alongside killer tips for doing vegan. Speaking of, I have some questions for devout veganists, scroll right to the bottom of this post to go all Hermione on me.

Quinoa is my new favourite thing, I think I discovered it on Oh She Glows, the blog that introduced me to the very concept of food blogging. Kind of boring alone, but unbeatable with a glug of good olive oil, a generous amount of garlic and a squeeze of lemon juice. I liked it before, but its about to become my new best friend. The biggest concern I have right now is protein, or potential lack of it due to cutting out meat and cheese. I’m slowly letting go of my protein panic through research and have happily discovered that quinoa is high as a kite on protein, and contains all those essential amino acids. It’s not a delicious steak, but it does provide a decent source of iron, and I have it on good authority that there are a couple of antioxidants in there, too. So all in all I think I’ll be buying it by the kilo over the next month and a half.

Radishes are a really good source of vitamin C, but have a little too much bite for some tastes. In this recipe I’ve messed around with them a little to mellow out that initial punch in the face flavour that crunching in to a radish conjures, whilst still keeping that radish-y zing alive. It could be seen as a bit of a faff and isn’t essential, but I was messing around and it came out good, I recommend you try it when you have time. 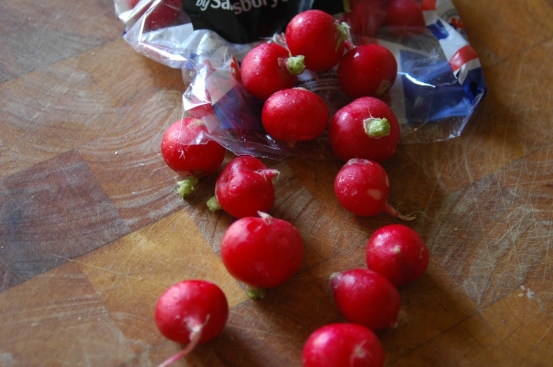 I don’t need to tell you why carrots are great because we all know that they give us night vision, end of story. I will tell you though that just like with the radishes, I experimented with marinading. You might think that I’m already missing meat so much that I’m applying meaty techniques to a vegan dish, and you’re probably right, but it totally worked and you can judge me when you try it.

This recipe is not gonna be everyone’s favourite, it’s a lot of work, but I think cooking is fun and I enjoy making it last at the weekends, so if you’re of the same persuasion, each little bit of this salad is deconstructed below. Do everything in whatever order you want and throw it all together when you feel like it, it’s designed to be eaten cold and at leisure. Alternatively, use just one of these salad components in your own creations. 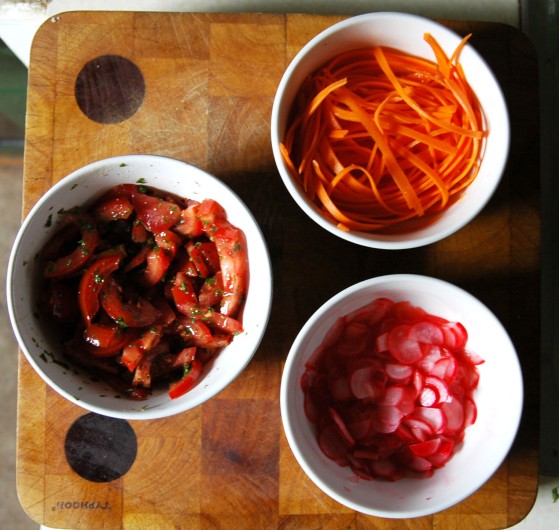 Rinse the quinoa (I throw it in a sieve and blast it with cold water) then put it on to boil with 600ml boiling water for 18 minutes. The reason 600ml is specified is because it allows the water level to become a signifier of the fact that its ready, once the quinoa is peeping up to the surface, you’re there. Drain and rinse again when it’s cooked, and swirl through the olive oil, garlic and lemon juice. Treat yourself to a spoonful, it’s so good. Actually do this with all of these, they all taste great individually.

Pre heat your oven to Gas Mark 7, cut the sweet peppers in half and deseed them. Then throw them in a roasting dish, drizzle with olive oil and sprinkle with salt, give the dish a good shake about then slide it in to the oven. They want about half an hour to forty minutes with a good shake part way through roasting.

10 radishes, sliced finely
juice of half a lime
a squeeze of agave syrup
a few shakes of vinegar (anything from white wine to malt, just not balsamic)

Combine all ingredients in a bowl and cover with cling film, leave for anything from 10 minutes to 3 hours, I can’t vouch for overnight because I didn’t wait that long, but that could work too.

1 carrot, cut in to ribbons with a peeler
juice of 1 orange

Same instructions as above, it’s probably worth moving the carrots around in the juice every once in a while to make sure they’re soaking it all up.

Again, same as above. I warn you though, keep these out of sight or there’s no way they will make it to the dinner table, so delicious.

Toss the spring onions and rocket together, then put all the dressing ingredients in an old jam jar and shake ’em up good. Then introduce the dressing to the salad leaves. 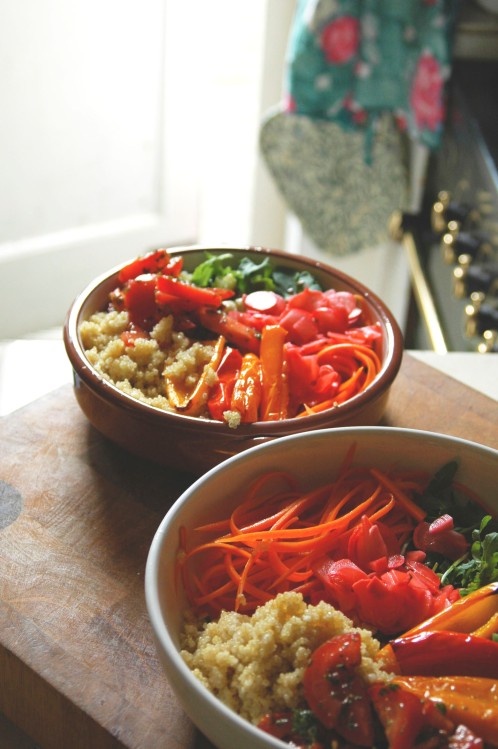 I urge you to try all of that stuff in one bowl, but I beg you to try at least one of them.

Those vegan expert questions I mentioned at the beginning of this very long post:

In light of today’s sad news that the world has lost another comedy genius, today’s track recommendation is just thirty seconds long and a slight deviation from the norm. RIP Rik Mayall.