I simply had to include Västerbottensost in a recipe after hearing the old wives tale about its start in life. As the story goes, it was made by accident in 1872 by Ulrika Eleonora in Sweden. She was distracted from her dairy maid duties by a lover, and when she returned, believed she had ruined the cheese. But it turned out she’d made this awesome stuff. How cool is that story?

So I had a little think about what I could make that would reflect the magic that can sometimes come from forgotten-about foods, and what better fits that bill than croutons? You know the drill, you buy a loaf of posh bread for some occasion or another, it doesn’t all get finished and you leave it in the back of the cupboard where it goes undiscovered ’til the middle of the week. But all is not lost when it comes to stale ciabatta, bake them in the oven with some olive oil and they’re reincarnated as gourmet croutons. I thought that was a pretty good fit.

Before I go on with the recipe, I’ll tell you a little bit more about Västerbottensost. In Sweden it is known as the King of Cheeses, and if that’s not enough of a clue as to how great it is then the fact that it’s only available in Waitrose and Ocado should be. It’s a hard cheese, a little softer than cheddar but capable of doing all the same stuff with way tastier results. It grates nicely, melts well and would be a welcome addition to any cheeseboard. 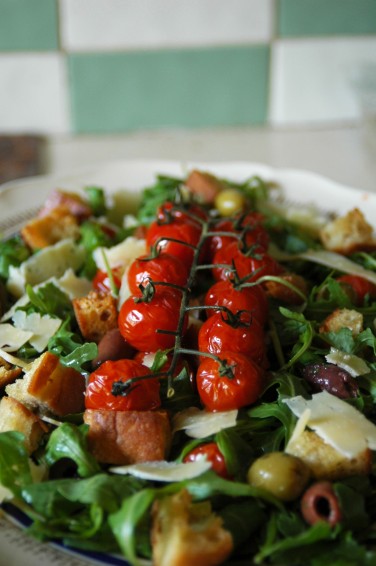 Your track recommendation for this recipe is Buffalo Stance because (fun fact) Nenah Cherry was born in Sweden.

Happy Pub Day Eve to all those celebrating 🍺
I think if it was a Saturday night you’d have steak with peppercorn sauce and a bottle of seccie for no good reason wouldn’t you
Honey mustard potato salad with radish and cucumber (pink and green, always 💗) providing much needed nutritional value after 2kgs chocolate in the last 72 hours 🥒
Hope you’re all enjoying treat induced comas and ignoring viral videos of strange men demonstrating how much sugar there is in a creme egg 💛
Loading Comments...
Comment
×
%d bloggers like this: