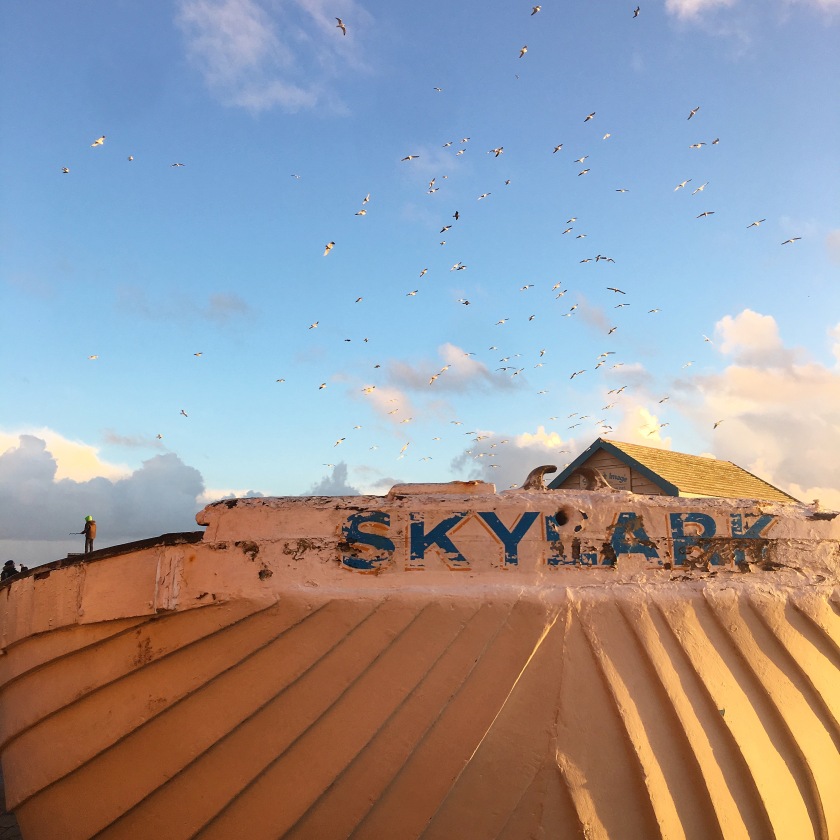 Yesterday, we walked 6 miles from Tom’s parents house (where we’d been to walk the dogs) to the Marina because I’d been feeling a little sorry for myself all week as 1) I hadn’t had a good walk in far too long and 2) it’d been at least a month since I’d had a good look at boats. It was one of those rare January days. Bright, gloriously sunny and beautiful but chilly enough to bury your head in a wooly hat, shove your hands in your pockets and walk at a sensible, brisk pace.

We were lucky enough to be walking between the two piers at around 5pm, so we got to see the starlings and their infinitely fascinating murmuration. Hundreds of them, all moving together but apart but together in this mind boggling dance they do for 15 minutes or so each evening. I didn’t manage to get a picture worthy of showing you, but if you’ve never seen them before then take a look at this video somebody uploaded of them last year. Or perhaps treat yourself to taking a walk to the end of the pier after work, and watch them fly under, over and around you. Don’t bring your headphones, you’ll want to hear the humming of their collective wings.

These were vegan burritos. Rice with lime and coriander, salsa, refried beans, guacamole, baked sweet potato. Veganuary has been interesting this year. I started with so much enthusiasm, but half way through the month I really faltered, and never managed to get my mojo back. So now I’m calling an official end, a couple of days early, to my participation – and in truth, I’ve been incredibly loose with it for a while already. I miss posting on Twitter, Instagram and this blog about all food. I don’t think I was ready for the huge limitations this challenge puts on you this year, and I’m more glad it’s over than I have been before. Will I still take part in 2018? Probably.. but I need to work out how to get myself psyched for it again.

We’ve booked our double birthday/Valentine’s Day holiday to Dieppe, which means I’m going to France for my birthday in like two weeks! It also means that for the first time I’ll be able to try my hand at a little travel blogging. Thrilled doesn’t quite cover it.

At the movies this week..

T2: I loved it. When I turned to Tom once it was over and asked what he thought, he said “well it was nowhere near as good as Trainspotting” and after I thought about it for a moment, I decided he was absolutely right. What I love about Trainspotting is the hard hitting, raw, unapologetic nature of its story. It’s a clear snapshot of a certain way of life in a certain place at a certain time. T2 was almost the opposite, its a great film in its own right (in my opinion) but its miles away from the truth element that Trainspotting had. Over dramatised fight scenes, moments of inexplicable coincidence. It just had a lot more artistic license, perhaps, than its iconic predecessor. Go and see it, but be ready to be faced with something of a slightly different – though not necessarily lower – calibre.

Hacksaw Ridge: Historically, I’ve not been much of a war movie girl. Hacksaw Ridge has changed my mind. It’s based on the entirely true story of an unbelievably brave and heroic conscientious objector who refused to hold a weapon in training or on the battlefield, but became more valuable to his comrades than anybody could have imagined. This film had the best battle scenes I’ve ever seen, and made me sob at the end – you know, the bit where they throw facts up on the screen and show you little interviews with the men involved. It was fantastic, and absolutely worthy of all the awards its up for.

Join 18,799 other followers
Follow Cate in the Kitchen on WordPress.com
My Tweets

Cook 75-100g pasta according to pack instructions 🧈 Melt 20g butter in a saucepan, add 1 tbsp flour and stir to a paste then gradually add like 200-300ml milk, or keep adding just til you have a thick sauce - stirring all the time 🧀 take off heat and add 1/2 tsp mustard, little bit of salt and a big handful of cheddar 🥓 get the cooked pasta in there and serve with crispy bacon on top x
🌈🫶🏼 we missed you 🫶🏼🌈 #brightonpride
🤠
I have been thinking about you since breakfast time 🍑
Loading Comments...
%d bloggers like this: