Yesterday afternoon, Tom and I went to see The Lion King at Lyceum Theatre. It was one of the most spectacular shows I’ve ever seen. If you’re one of those people that’s always wanted to go but never gotten around to it, book your tickets now.

We’re not here to talk about The Lion King though, we’re here to talk about where we found to eat afterwards, that’s what you all come for. Having absolutely no knowledge of where to go in London, I asked the internet for recommendations close to the theatre. Beth on Twitter suggested Bodean’s BBQ. I saw the word BBQ and noted that it was literally a two minute walk from the theatre and was immediately sold.

Bodean’s is clearly doing well, with 8 locations across London and the Covent Garden restaurant being almost fully booked when I called to secure our table. It was founded in 2002 by Andre Blair, who hails from Kansas and has undoubtedly brought that southern states of America feel to the heart of London.

As soon as we walked in, we couldn’t stop ourselves from saying “shit, this place is cool” for a good 10 minutes while we perused the menu. Seating is mostly booths – at the end of each is a coat rack, which may seem insignificant but is something I’d never seen before and was insanely useful – and the walls are decked with old school beer ads, rams heads and little piggies, it’s all topped off by the appropriate soundtrack of deep south country music.

Maybe it’s just me being easily excited, but I did a little squeal when the waitress showed to our table. I think I might be on the other side of popular opinion here, but I love the booth eating experience, it’s like having a little place of your own in a packed out restaurant. Huge bonus points were earned for the spotlessly clean table. Most places that serve BBQ always end up with a stickiness that can’t seem to be wiped clean from any and all surfaces, but Bodean’s have got that on lock down, it was pristine.

We ordered two Boss Hog Brews – cause if a restaurant makes its own beer it’s almost rude not to try it –  a nice, smooth lager and not outrageous at £4.65 a pint. I wish we were the kind of people that ordered completely different foods so that I could give you a better scope on the menu, alas, we both had our heart set on the 1/4 chicken, baby back ribs and pulled pork combo for £16.95. I added onion rings at £3.75 and Tom swapped his regular fries for chilli cheese fries for an extra £2.95. 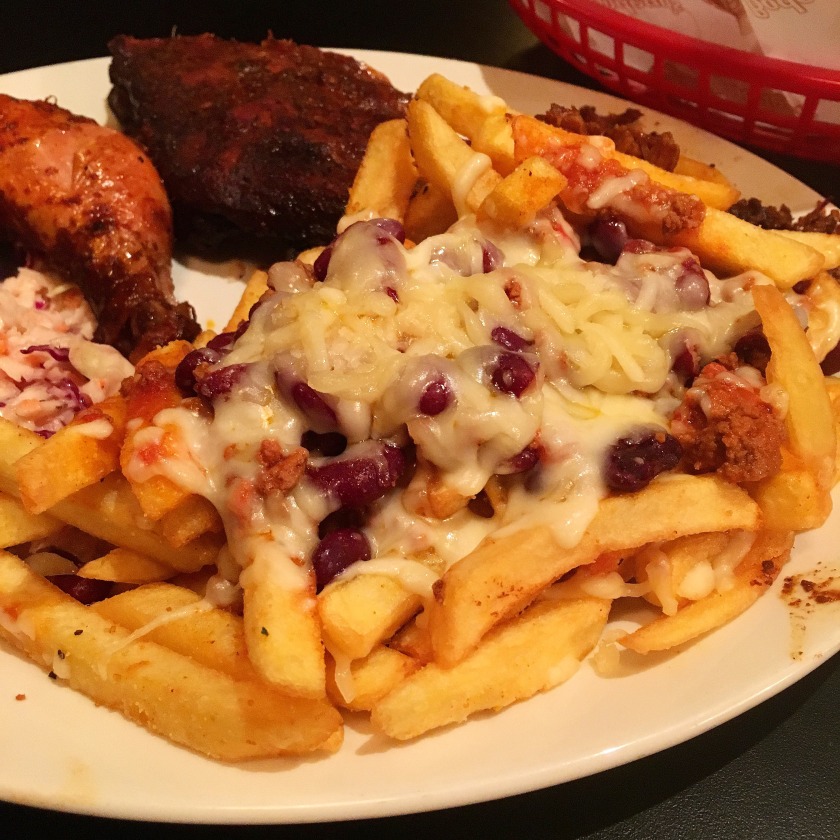 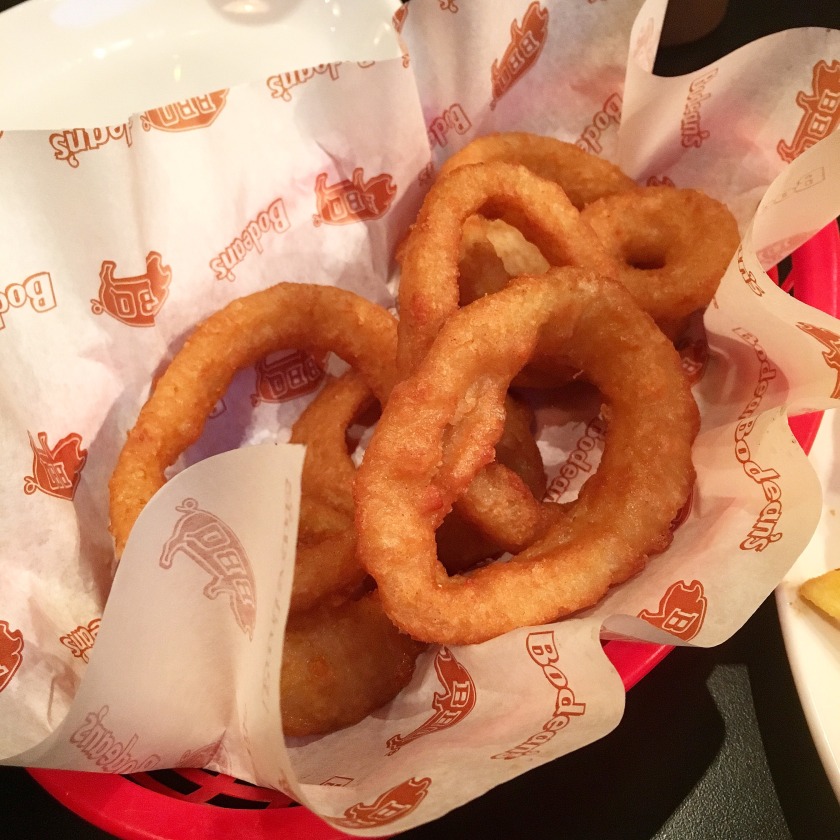 Everything was amazing. The gorgeous, smoky flavour really came out best in the chicken – I’ve never tasted meat that had taken on that signature smokiness so well – and it was cooked to slide-off-the-bone perfection. However, it’s the pulled pork that I’ll be having dreams about for the next few weeks. I’ve honestly never had it better. The slaw was fresh with a nice crunch to it, and the onion rings were up to standard. Tom’s chilli cheese fries were.. well, they were chilli cheese fries, when are chilli cheese fries not excellent?

Obviously, we passed on dessert. With an added service charge of 10% (I think I’m a fan of this, takes the maths and faff out of tipping) our bill came to £54.89, not half bad for dinner in the West End.

Have you been to Bodean’s? Have you had better BBQ in London? Let me know in the comments.