As I write this, I’m sat at my desk at work, utterly miserable to be back in stupid, rubbish England. We had the most wonderful long weekend in Hamburg, so wonderful that the holiday blues have set in very quickly with the weight and rigidity of cement. Boo. I’m hoping to fling a few posts about the weekend your way before the month is up, and I thought hamburgers might just be the best starting point. We were lucky enough to try two – which fared best?

Before I went away, I asked as many people as would listen what their food recommendations were. Otto’s Burger came up again and again as the best burger joint in the city. Naturally, therefore, it was the first place we actively hunted down to eat. 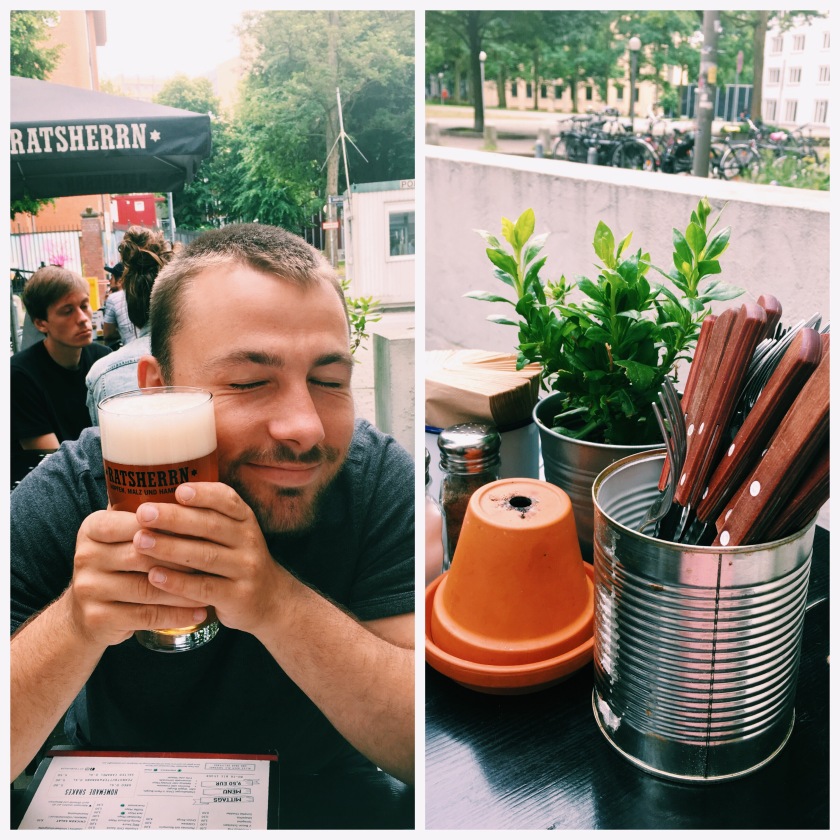 The drinks menu, as with all of the places we ate in Hamburg, was well stocked with locally brewed and reasonably priced beers – much to our delight. With a pint in hand we each chose our burgers from the varied but not extensive menu. Tom went for Chick’N’Parm, I had to order the Mr. T Burger because if something is named after Mr.T then you order it and that’s that. However, neither of us were anywhere near as excited for our burgers as we were for the special fries – chipotle bacon cheese smothered ones.

Our burgers were great, really good, but not next level. They didn’t have the edge that a burger from, say, our lovely friends at Troll always do or the edge that I was sort of expecting from the sheer amount of people that recommended them. My Mr. T burger was a good, solid cheeseburger – well cooked patty, quality gherkins – and I’d happily recommend Otto’s based on it, but it’s not something I could rave about.

A real stand out did come from that meal though, and one that I truly will remember forever. Those special fries. Smothered in chipotle bacon cheese sauce and guacamole then scattered with jalapenos. I mean just look at them, top left in the picture above. They’re dreamy. I’d return just for a double portion of those (if  I was ever lucky enough to find myself in Hamburg again).

Burgerlich was an entirely accidental discovery in Old Town (I think it’s Old Town, anyway). We actually didn’t want to have burgers twice in the one weekend, and I was still in desperate search for schnitzel, but we’d been walking for hours and this was the only place around so burgers in duplicate it was. The beer situation was the same here as at Otto’s, but the choice of burgers was a little more interesting (to me, anyway). I was delighted to see a ‘kraut burger’ and so immediately ordered that, and Tom opted for his beloved pulled pork.

Both absolutely blew us away. The patties tasted as thought they were made from good meat and were cooked to perfection, the sauerkraut and relish made for the perfect flavour combination and because it was a kraut hamburger, I felt like I was eating something suuuuuper German – exactly what most food lovin’ tourists are looking for, I shouldn’t wonder. However, again, I was even more mad for the fries.

“This is what we call chips here” said the waiter as he was helping me with the menu. They’re like crisps but better. So much better. And came with a side of wasabi mayo. Actual heaven, another thing I’ll be searching high and low to find around these parts.

Both are great burger joints. In each, you’re looking at between 7 and 9 euros for a burger and then between 2 and 4ish euros for your beer depending on what you go for. The service in each was faultless, really helpful members of staff that very kindly spoke to us in English (even though this never fails to make me feel guilty and useless) and I’d happily send friends and followers to both. However, Burgerlich won us over. Their burger selection had the upper hand and they had a little more wow factor on their side.

So, I hereby crown Burgerlich the best burger in Hamburg*

*of the two that I tried, in the short time that I was there..