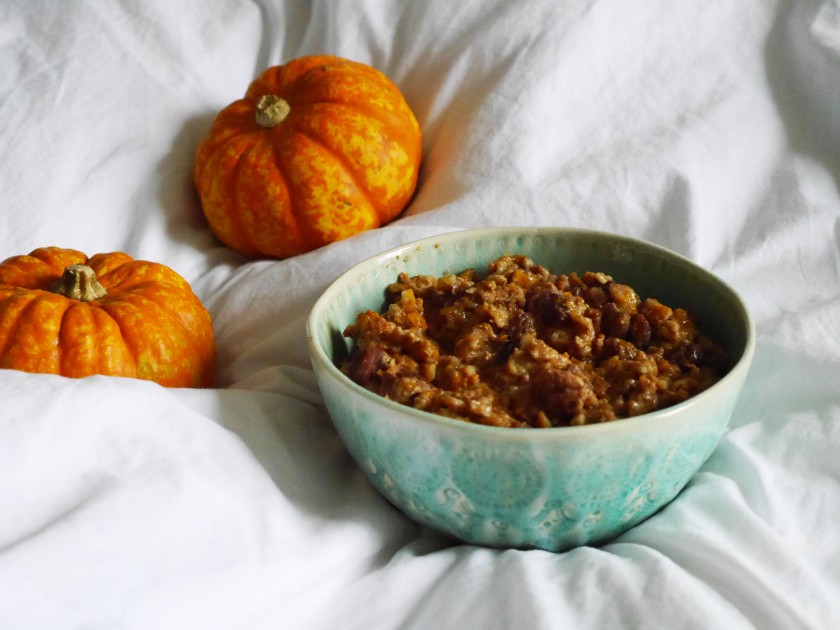 OK so I’m finally really, really, for realsies embracing autumn now. I’ve put fairylights next to the fridge. There are little ornamental pumpkins sat by the window behind the stove. We watched both The Deathly Hallows Pt 1 and The Deathly Hallows Pt 2 on the trot last night. The next logical step? Cake for breakfast.

Yes, if we’re going to be inside and damp and miserable, we might as well just constantly treat ourselves. That’s the way this season goes. Never ending self indulgence to make up for how sodding dark it is. In my defence, this porridge isn’t even really that cakey. I’ve not added sugar – apart from the sultanas and mixed peel – and I’m sure it’s probably a relatively sensible first meal, what with the chopped nuts and the oats that’ll slowly release energy throughout the day. I mean I won’t look into its nutritional value too keenly for fear of disappointment, but there are certainly less healthy starts to the day than this. 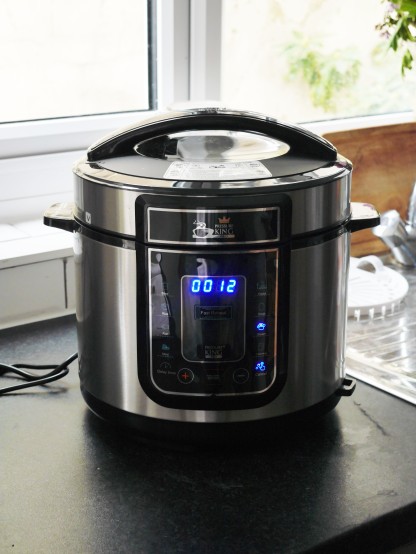 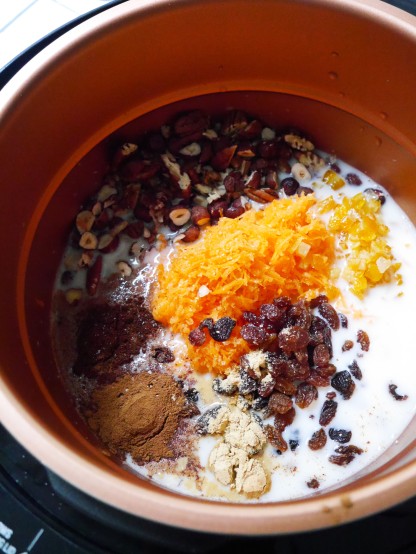 This recipe is coming at you through a new contraption that I was initially terrified of but am now rather fond of and not too keen to part with. The Pressure King Pro. It’s a pressure cooker (obviously) that comes in rather useful for cooking pretty much all the things you’re likely to cook around this time of year. It’s like a slow cooker in that you just bung all the ingredients in and press a couple of buttons, but much, much faster. You’ll see its speed benefits demonstrated more clearly tomorrow in our veggie chilli recipe, today I’m demonstrating the weekday convenience of chucking everything in the pot and wandering off for ten minutes to do your make up instead of standing over a saucepan while the porridge cooks.

Now, if you’ve not got a pressure cooker and have no intention whatsoever of buying one you can of course still make this porridge. Just make it the usual way. Chuck everything in a saucepan, put it under a low heat and stand over it nervously, stirring so it doesn’t stick until nicely thickened.

This stuff tastes just like carrot cake. I mean it’s void of the rich, buttery, cakey vibe, naturally – and there’s no cream cheese frosting. However, the spices, dried fruit and nuts and of course the carrot itself all come together to make for something that serves as rather a good copycat, in my humble opinion. If you want to grab yourself a Pressure King Pro you can do so on the High Street TV website. I’ve been using the 5L one. Look out for another recipe using him tomorrow morning!

Serves 2-4 depending on portion sizes

This post was in collaboration with High Street TV

Wimbledon 2022 🎾
baby got (hassel)back
surprise x
weekly update to the “just go through my instagram and pick something” selection for when people are coming round for dinner x
Loading Comments...
%d bloggers like this: