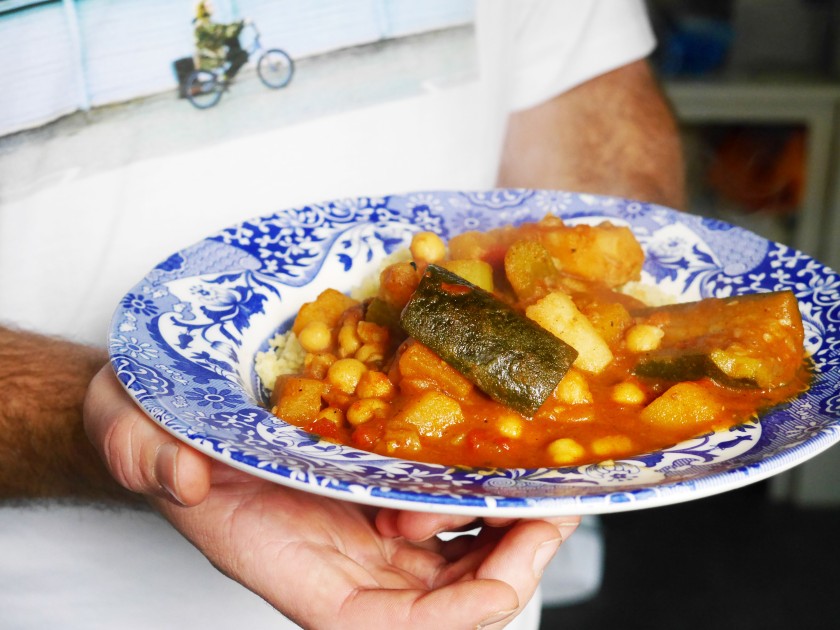 Around the World in 80 Dates is a blog series designed to take me (and Tom) out of our comfort zones and force us to cook food from other countries. Each week, we use a random country generator to tell us where we will be cooking from. We have to cook at least one dish from this country, the more traditional the better. We alternate who’s cooking each week, this week is Tom’s turn.. but I ended up cooking.

Algeria is a North African country – our first foray into Africa in this challenge, I think – and another big consumer of meat. Mutton is most popular, with poultry and beef following close behind. It’s a mean feat attempting to find a dish that doesn’t contain one animal or another.

However, the list of vegetables commonly used in Algerian dishes is notably high in comparison with the other meat heavy countries we’ve researched so far – they’re also incredibly similar to those used in many of our own traditional dishes. Potatoes, carrots, onions, tomatoes, cabbages. It’s all happening. This provided some comfort in the planning stages because, as you know, I’m trying to really reduce meat consumed in this household.

Cous cous comes up again and again, and seems to be popular across the country. So, in the end, I decided to just go ahead and Google ‘algerian cous cous’, which led me to this Genius Kitchen recipe contributed by somebody assuring us that it’s traditional to Algeria.

The recipe suggests either chicken or lamb, to vegetarianise I simply added neither and didn’t even have to replace the meat element with something else because there are so many veggies present. In fact, without the meat, this dish is completely vegan.

Vegetables (carrots, parsnip, potato, celery, swede, onion, garlic, courgette) are cooked with ras el hanout, chopped tomatoes and a little mint for a long, long time resulting in a thick, hearty stew situation that made us both very happy on a wintry Sunday afternoon.

Next week is my turn (again) and I’ve got Vietnam..

Join 18,799 other followers
Follow Cate in the Kitchen on WordPress.com
My Tweets

Cook 75-100g pasta according to pack instructions 🧈 Melt 20g butter in a saucepan, add 1 tbsp flour and stir to a paste then gradually add like 200-300ml milk, or keep adding just til you have a thick sauce - stirring all the time 🧀 take off heat and add 1/2 tsp mustard, little bit of salt and a big handful of cheddar 🥓 get the cooked pasta in there and serve with crispy bacon on top x
🌈🫶🏼 we missed you 🫶🏼🌈 #brightonpride
🤠
I have been thinking about you since breakfast time 🍑
Loading Comments...
%d bloggers like this: