This last weekend, Tom and I swanned up to Cambridge for a night. Having only ever known it as home to one of the most prestigious universities in the world, I’d always been somewhat curious about the place – so when the invitation from ibis Hotels came to take part in a Valentine’s City Swap with the lovely Tilly  (who’s adventures in Brighton you can read about here) I jumped at the chance.

Cambridge totally stole our hearts and surpassed our expectations for beauty, good food and a sophisticated night out (for us, anyway). I wish we could have stayed longer, but the amount of goodness we managed to pack in to 24 hours is something to behold. 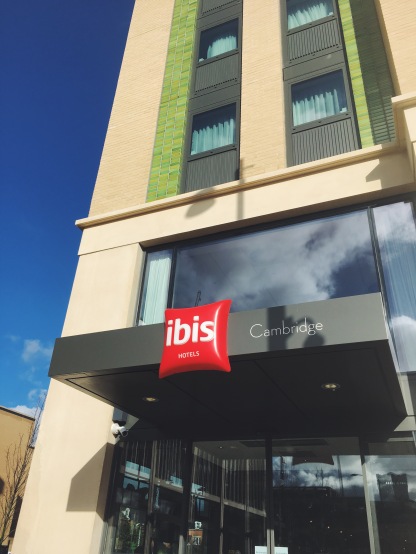 This trip was arranged and paid for by ibis, who very kindly allowed us a complimentary night at their Cambridge hotel. I think the term ‘stone’s throw’ is often over used when speaking with regards to how conveniently located something is, but ibis is quite literally a stone’s throw from Cambridge train station.

No, seriously, I think Tom (not I, I’m a shit throw) could actually chuck a pebble through the window if we were standing right outside the station. In the picture of the view from the breakfast room on the right hand side above, the building with lots of arches is the station. It’s really that close.

Upon checking in, you’ll be greeted by a delightful member of staff who will cheerily set you up a room key and briefly explain the basics to you (ibis will never linger over checking in or out) before giving you directions to your bed for the night.

Having already had the SweetBed experience at Brighton Big Screen last summer, I knew exactly what to expect when it came to settling down for the night. The ibis beds are bigger, firmer and cosier than ours at home, so it’s a pleasure to have one to call my own even just for one night.

The best thing about a night with ibis? How well they feed you the morning after. I don’t know about you, but it’s not often that I get the pleasure of indulging in an all-you-can-eat breakfast buffet, and ibis take the concept very seriously.

You’ve got your cold cuts, cheese, fruit, yoghurt, cereals, juices, bacon, sausages, hash browns, beans, eggs, and even a selection of mini pastries to finish you off. I’d be lying if I said the breakfast wasn’t one of the things I was most looking forward to about this weekend away, and it didn’t disappoint.

If you’re looking for a reliable hotel chain to put your trust in, ibis is sound. I just checked out prices for a night like the one we had and if I were to book a room there next Saturday it would set me back £93 for the pair of us. Not half bad.

Being a place steeped in knowledge and education, Cambridge boasts many museums. On most days, you can even have a wander around some of the colleges themselves to really get a feel for how the other (smarter) half live. In our fleeting time in the city, we managed just these two. 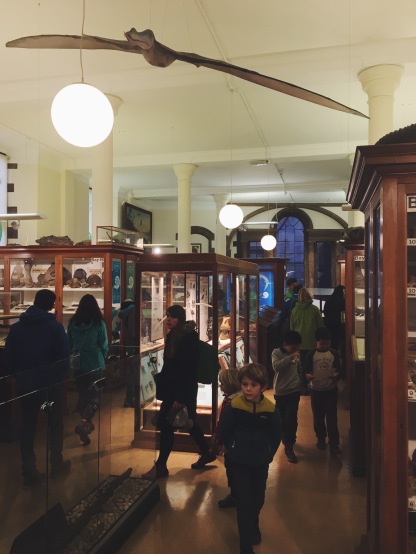 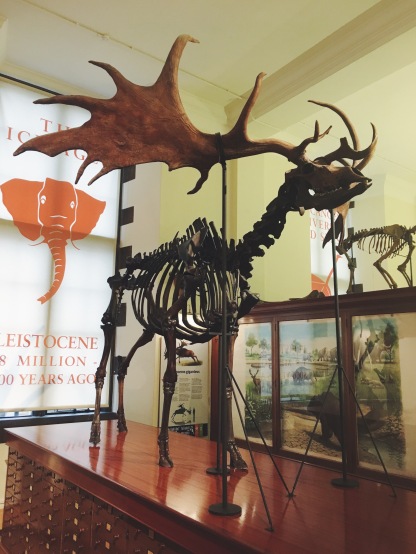 Sedgwick Museum is modestly sized and belongs to the University (as, we found, do most of the buildings in the city). It displays fossils, artefacts and research carried out both locally and slightly further afield. At least two of the cabinets are adorned with fascinating little bits of history that have been found over the years in Cambridge Sands.

Tom was in his element.

If you’re at all interested in ancient, natural or geological history, this is the place for you. Bonus points if you like learning about the place you’re in. Museum entry is free but donations are accepted on the door.

Far less modest than the above, Fitzwilliam appears to be the museum of Cambridge. A wander around these enormous, stately rooms took us through the wonders of ancient Greece, the mysteries of ancient Egypt and the beauties of Italian art.

If you’re looking for more broadly educational (as opposed to the local and under-the-groundy niche of Sedgwick) then you won’t be at all disappointed in Fitzwilliam. Entry is, miraculously, free here also.

I don’t think any of the pictures either of us took could possibly convey the beauty of the morning we spent punting along the river.

We took a shared tour with Scudamores that saw us sharing a great big boat with four fellow tourists. The journey lasted forty minutes, during which time we were guided down the gorgeous river by a lovely and learned man as he talked us through some of the most interesting anecdotes that the colleges of Cambridge have.

I’ll remember punting down that river forever. The crisp, bright sunshine and the idyllic English countryside views and the appreciation of how much knowledge had passed through the ground we were covering.

I didn’t think it possible to be so immersed in the history of a place, or to pay attention to someone for an entire forty minutes (#ADHDProblems) but both were made quite easy that morning.

If you go to Cambridge, go punting. Whatever the weather. It’s not optional. 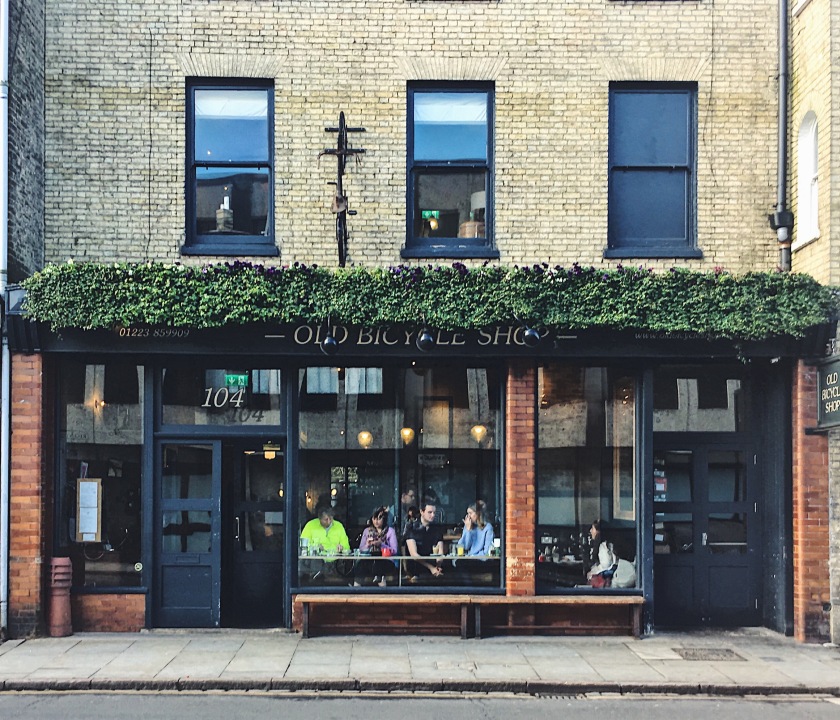 This restaurant came on recommendation from the lovely Tilly (our fellow city swap blogger) and it didn’t disappoint.

The interior is kitted out with little bikey bits (Tom, being very much a bike man, found this much to his taste) with handlebars on the walls instead of stag horns. The front of the restaurant is a pub/bar where people can mill about having a drink, so the atmosphere early-ish on a Saturday evening had a pleasant buzz.

I ordered the pigs cheeks with black pudding croquettes and Tom went for the posh lamb kebab. I had food envy but both were delicious. Expect to pay between ten and fifteen pounds on a main course depending on whether you’re feeling veggie or carnivorous.

When I mentioned that Tom and I were planning a weekend in Cambridge, at least ten people insisted that we head to Fitzbillies for delicious delicious baked goods. Who am I to rebel against such strict instructions?

It seems that Fitzbillies are something of an institution in Cambridge, their chelsea buns in particular being famous across the land. I can see why. When we popped in to grab a few bits to take back to the hotel, the place was absolutely manic. Shelves and racks and piles were stacked high with treats, and in the end we settled on a couple of things with a Valentines theme (I can’t resist).

I was particularly impressed with – and charmed by – the macaron cupcake pictured above. Fitzbillies are absolutely worth a visit to satisfy your inevitable hankering for cake while you’re wandering the streets of Cambridge.

Stepping out for the evening in Cambridge was a wildly different experience than braving it at home. I love Brighton, but the atmosphere in town on a Saturday night is.. well, it’s best avoided unless you’re absolutely bladdered (which I often am, in all fairness, but that’s beside the point).

The streets were filled with merrymakers of all ages having a good time, moving from place to place without breaking out into violent fights or throwing up all over the pavement. It was a treat for us to behold. 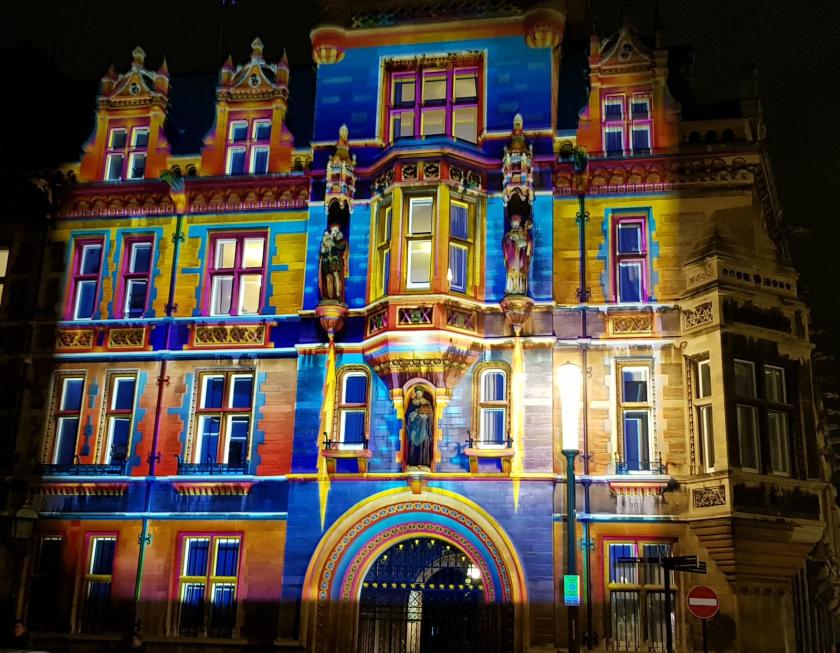 Really I should have included this in the culture section, because it’s an art project that’s been carried out in conjunction with the council and the museum, but it was so part of our night out experience that I had to include it here.

We stumbled across this amazing light projection quite by mistake, and had the pleasure of standing in front of it in complete awe for about ten minutes, watching it take its full cycle. Both of us commenting on how at home it made us feel, to be somewhere that clearly felt passionate about the importance of the accessibility of art. You can find out more about the festival here. 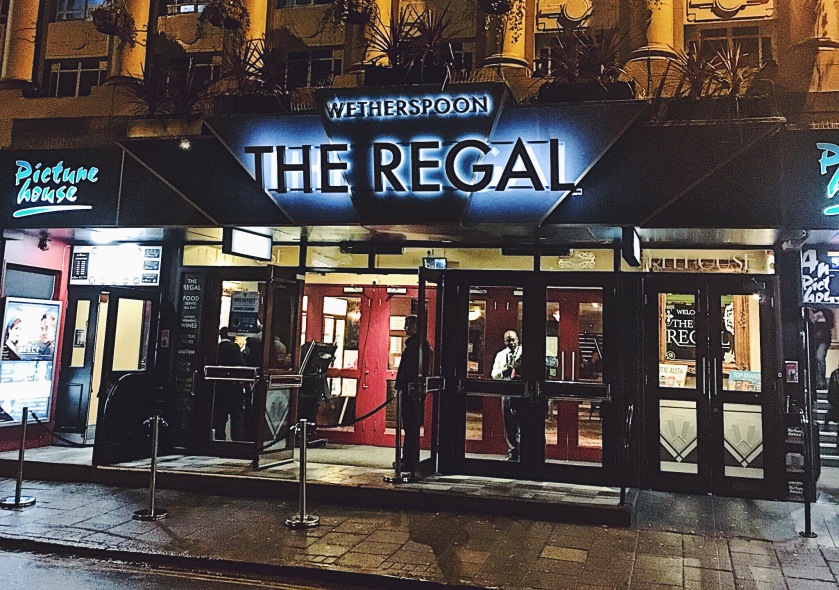 Alright, look, in my defence: everywhere else was rammed. I mean, really, it was a Saturday night. We were sobering up after dinner, I needed a prosecco top up stat and this looked like the dreamiest spoons I was ever going to set foot in.

I love a Wetherspoons, wild horses couldn’t drag me away, I admit it.

On a serious note, this place wasn’t half bad. It was a damn sight classier than any of the branches we’ve got at home and, get this: they put music on at nine o clock! Actual music!

It’s a truth universally acknowledged that spoons (in Brighton, at least) must remain tuneless and zapped of any musical atmosphere at all times. The picture of my grinning mug was snapped at the exact moment that an absolute banger came on and I realised it was coming out of actual real life speakers in the pub. 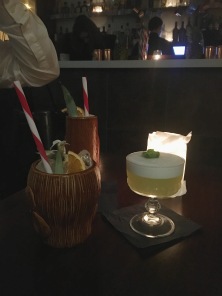 This was our favourite watering hole of the three we drank at by far, and was recommended to us by a lovely lady that we got chatting to at dinner.

From the outside, 90 looks closed (of this, we were warned) because the blinds are shut and only a flicker of candlelight can be seen from within. If you’re brave enough to open the door and let yourself in, you’ll be rewarded with proper cocktails (around the £7.90 mark each) made right in front of you in a relaxed but well soundtracked setting.

I feel like this might be one of those ‘best kept secrets’ things, so er.. don’t tell anyone else, yeah?

Much more of a chain bar (think Vodka Rev’s) vibe was what greeted us at The Snug. Cocktails (much weaker but far closer to the £10 mark) served in mason jars to the tune of familiar radio music.

Chain vibes are not to be slagged off, they absolutely have their place in a city and I’m so glad we got to experience a fancy spoons, a proper indie cocktail bar and something a bit more revsy all in one night – weren’t we busy!

There concludes what I think might be my longest ever blog post. Thank you so much to the team at ibis for giving us the best Valentines weekend we could have hoped for.