Last year, I was working for myself and watching the show live along with the rest of you. Tweeting furiously (as in quickly, not as in angrily) throughout using the hashtag and pulling it apart during the hour that followed with fellow obsessors. This year, I work in an office on Wednesday nights, so I miss the whole shebang. I actually only finished watching this weeks episode the night before last, so I’m getting waaa-aa-a-a-aaay less time to plan out each bake this year. The difference in experiences is really making me appreciate how much time I had to dedicate to the kitchen in 2015 but, also, pat myself on the back for my new ability to properly manage the smaller amount of time I have now. Constantly checking in and up on yourself is a very healthy thing to do, I think..

In my first post, I said that I hadn’t found anybody to fall in love with. We’re a few weeks in now and I’m happy to report that I would like to marry Candice please. Or perhaps be her, as opposed to marry her. Or maybe both. She’s my new actual real life idol. I’m considering a shrine.

When Mel and Sue (oh, how I shall miss them next year) announced that it was batter week at the beginning of this weeks show, I was at first thrown because it’s a first but then filled with confidence. I’ve always been pretty good with batter. It’s not quite as rigidly sciencey as bread (that I can never get to bloody rise) or as intricate as patisserie (that I just don’t have to the steady hand to perfect). And filled yorkshire puddings? Best. Idea. Ever.

I kept my idea super simple. Yorkshires filled with chicken (baked chicken thighs, specifically), stuffing, and gravy. I don’t have bags of time before work in the morning (OK fine I do, I start at 3.30pm, but I’m lazy, OK?) so the plan all along was to make the stuffing and gravy not at all from scratch. I found a sweet potato knocking about in the kitchen this morning so I thought I might as well mash that and chuck it in there too for a bit of extra colour. 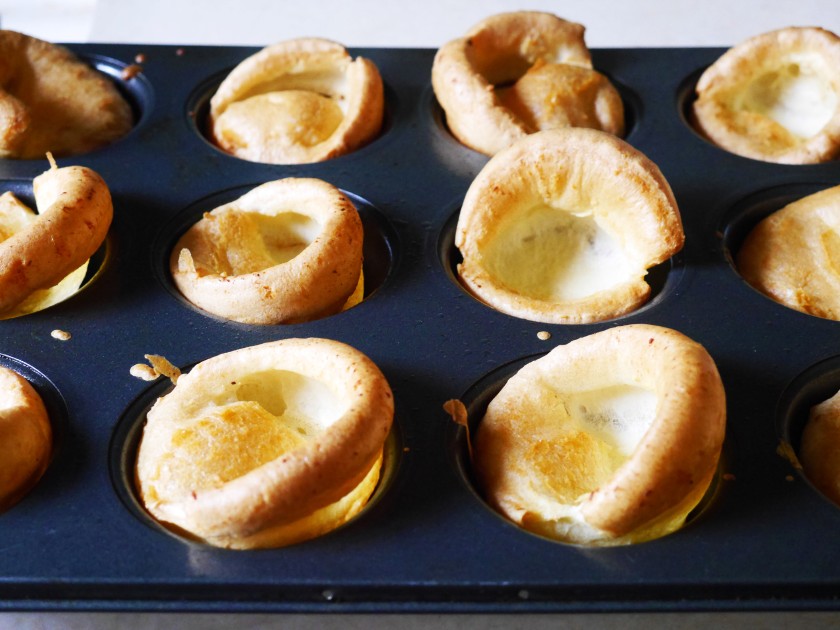 I made the yorkshires using this recipe, because the BBC may have lost my trust politically but when it comes to food I know I’m safe in their hands for now. I had leftover chicken fat from a roast at the weekend, and used that to cook them in, and you could definitely tell. That was a stroke of genius if I may say so myself. The first batch (those pictured) was ever so slightly overcooked and on the crispy side, but the following ones were perfect and soft and pillowy and it took all of my restraint not to eat every single one.

This is definitely the most delicious bake I’ve done so far during GBBO season. Honestly, they were out of this world. Let me know what you think!